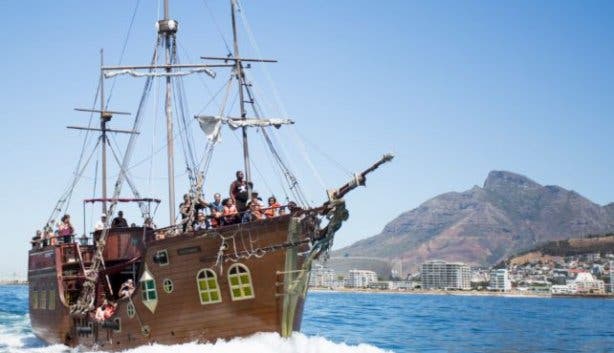 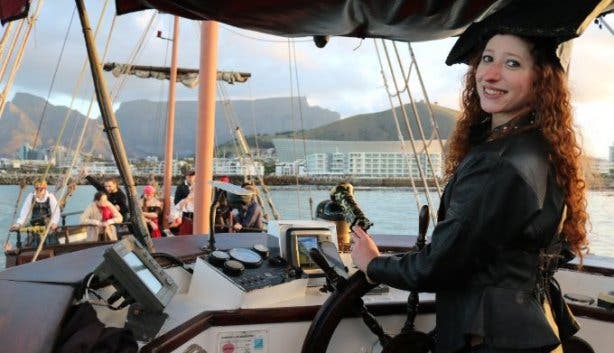 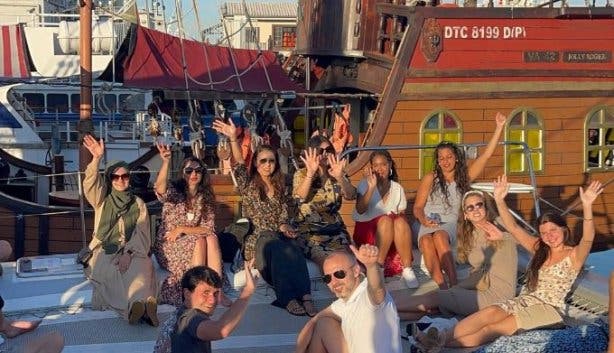 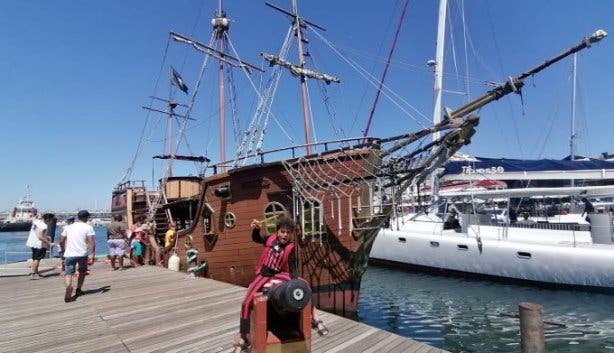 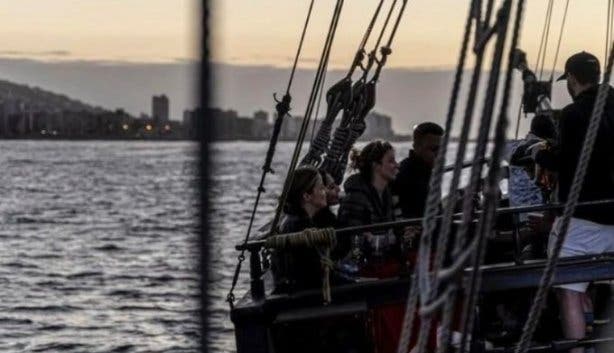 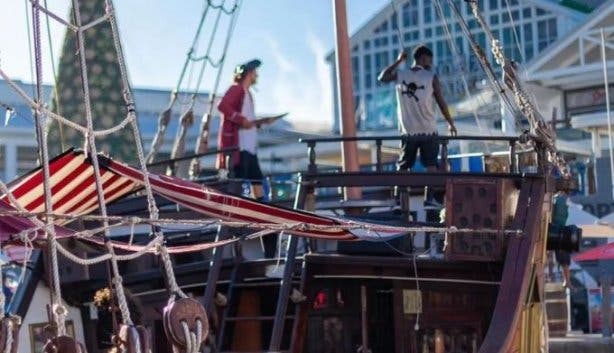 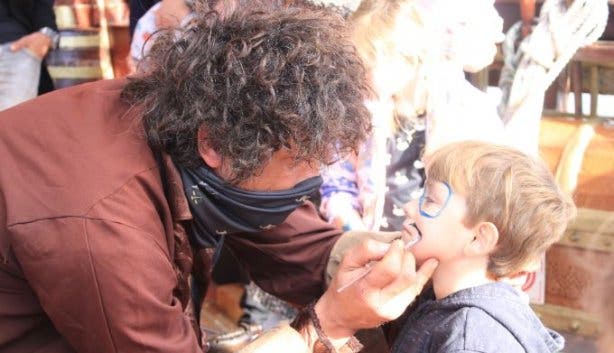 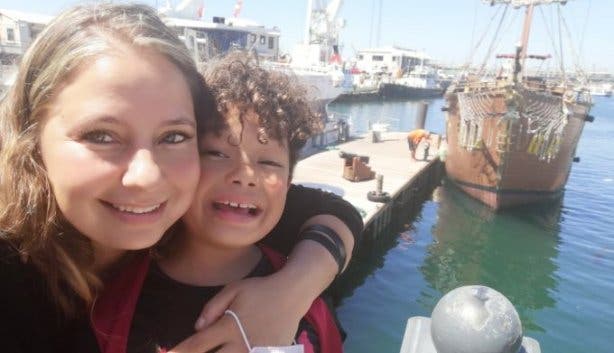 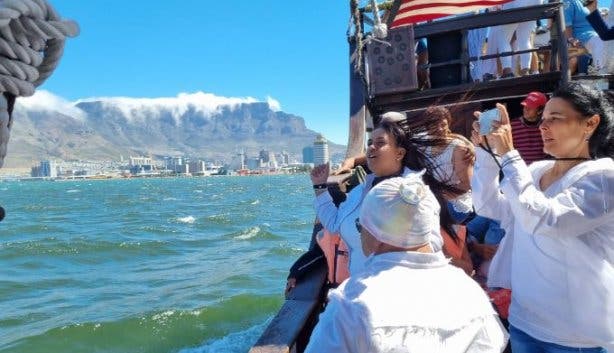 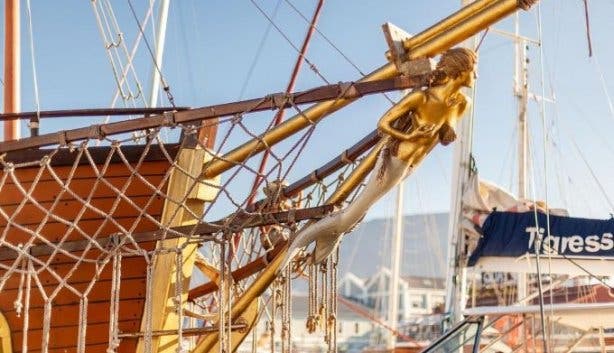 Here’s a party idea: dress up as a pirate and board the Jolly Roger, South Africa’s only pirate ship. It’s great for birthday parties, end-of-year dos, bachelor/ettes send-offs and other celebrations. 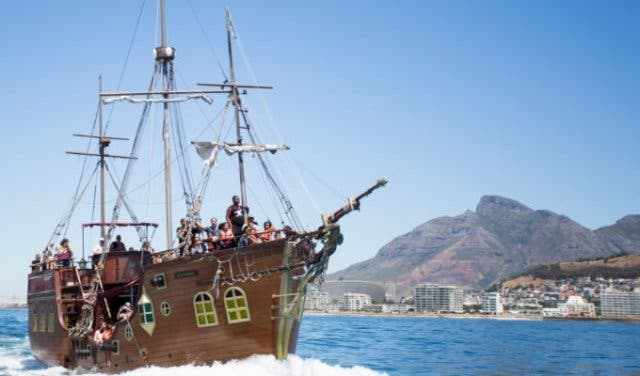 You’ve most probably seen it, but have you been onboard? It’s an experience for the adventurous. Image: Yacoob Yachts

You can sail the seas any day of the week, any time of day – including sunset – eating, drinking, dancing to DJs and playing games. It’s awesome for the young-at-heart, especially kids. We sent a pirate and his parent to check it out.

It is Saturday at 1pm and we’re about to embark on an adventure as crewmates on the Jolly Roger. We’re on a day trip with other families and young children, all wearing SAMSA-approved life jackets over our pirate garb.

Leonardo planned his black-and-red pirate slops the week before, making sure he had his golden cutlass at the ready, too. We board the Jolly Roger after taking a souvenir picture of Leonardo brandishing his sword on a cannon. 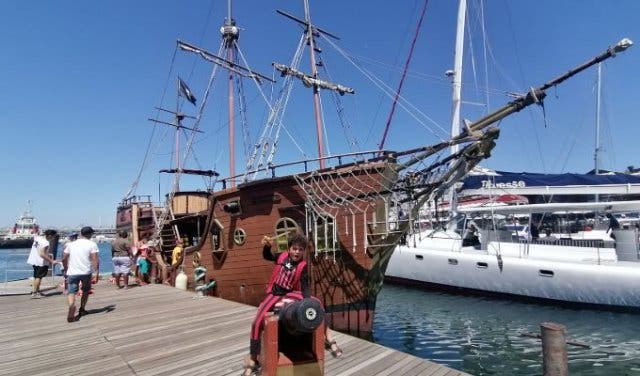 The Jolly Roger is made from special yellow balau wood and can easily host up to 75 passengers. It is part of the Esa Yacoob yacht fleet – which includes the 62-foot catamaran Tigresse – and runs three to four trips daily, depending on the weather and the demand. In the high season it completes 6 trips daily, including sunset cruises. 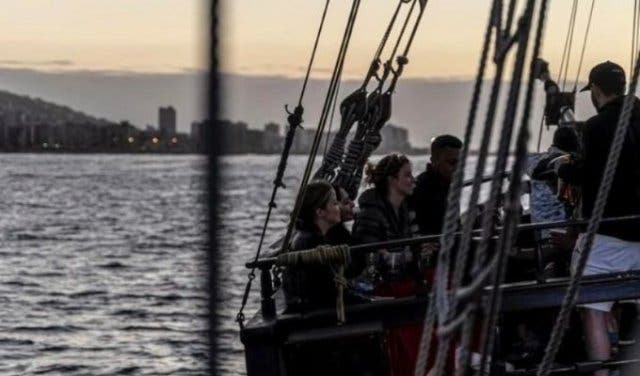 LISTEN TO THE CREW TELL JOKES

We sit on the upper deck at the stern, just behind the helm, and meet Captain Bob Duv, who has been taking scurvies out to sea in the Jolly Roger since 2010. He tells us a joke: 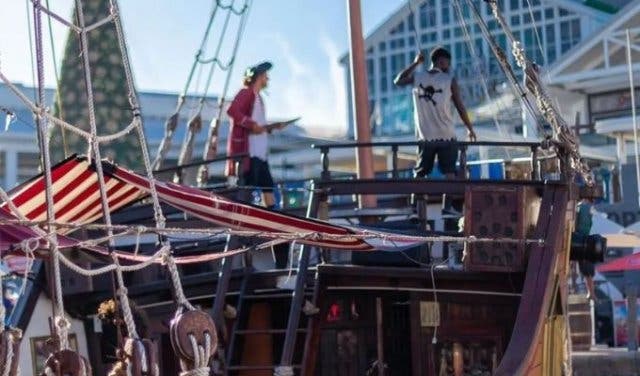 Get ready for a fun-filled day full of laughter with the Jolly Roger. Image: Jolly Roger Pirate Boat

As we sail out into the open seas, Captain Duv points at a land mass and exclaims, “Land ho! It’s Australia!” and at its top speed of 15 knots (about 28km/hour), it is no wonder we can see the land down under (really Robben Island, in Table Bay, near Sea Point) so soon.

GET A PIRATE MAKEOVER, MATEY

Captain Duv’s first mate, Pedro, stumbles up the stairs carrying a cannon on his shoulder and some face paint in a bucket. Just another day in the office for this pirate of the seven seas. All the children get a pirate facepaint makeover, including Leonardo (who has become more pirate than boy at this point) and some unsuspecting adults. 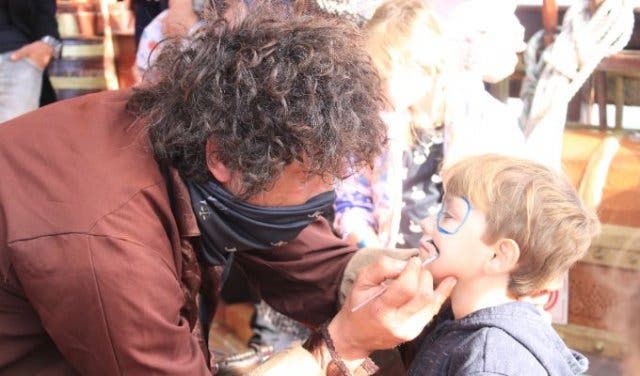 Everyone gets the markings of a pirate: boys, girls, teens, adults – no-one escapes the facepaint. Image: Yacoob Yachts

Shenanigans aside, the view from the boat is breathtakingly beautiful: Cape Town bragging and showing off Table Mountain, Devil’s Peak, Lion’s Head and Signal Hill. We spot some “retired” seals (as they lie about in tyres on the harbour walls) and penguins and an elusive sunfish. On lucky days, visitors can see whales, sharks and dolphins, too.

I tell Leonardo, aka Sir No-Beard (“because I haven’t hit puberty, mom!”) that he can celebrate a birthday on the Jolly Roger with all his friends if he wants to. “That would be epic!” he says. The Jolly Roger allows for a minimum of 10 kids and a maximum of 24 kids per two-hour children’s party, which can be booked on Fridays through to Sundays weekly (cost starts at R250 per child). 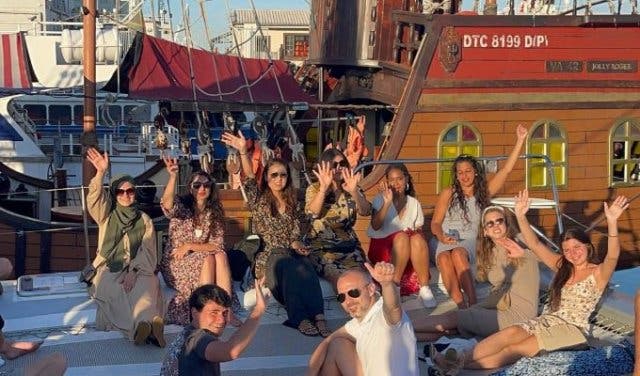 Parties are not excluded to kids, though. This venue is also a favourite for end-of-year work dos, bachelors and bachelorettes, adults parties and sunset cruises – there are DJs onboard to get the bash going. The vessel has also been used for photoshoots and music videos that require an authentic and historical pirate backdrop.

YOU GET THE BOAT EXCLUSIVELY FOR AN HOUR

Children’s birthday parties are structured like this: The first hour, the Jolly Roger is moored at her berth in V&A Waterfront and kids and parents get the boat exclusively for their event. In this hour, the crew play party games with the kids including swearing to the pirate pledge, face painting and a treasure hunt. Costs for the whole experience start at R250 per child and R220 per adult. 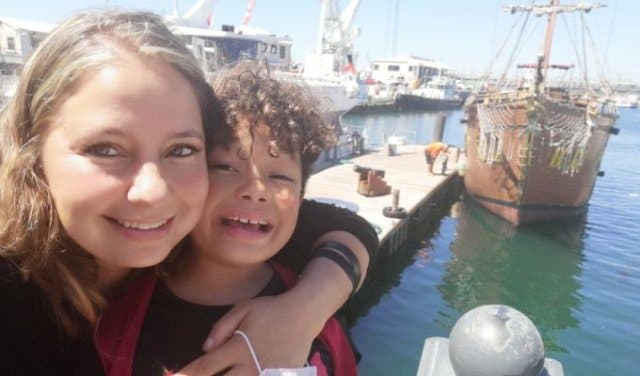 Pirate Sir No-Beard and his mother, Charlene, board the Jolly Roger Pirate Boat to see how much fun they can have (answer: a lot). Image: Charlene Yared West

The kids also get party packs and birthday cake and if pre-arranged, food and drinks. These can be provided by the Jolly Roger suppliers or the parents, the choice is yours. The Jolly Roger can create party packs to suit your budget, as well as decor and entertainment options. After the initial hour, members of the public join the cruise and everyone goes out to sea for the second hour. 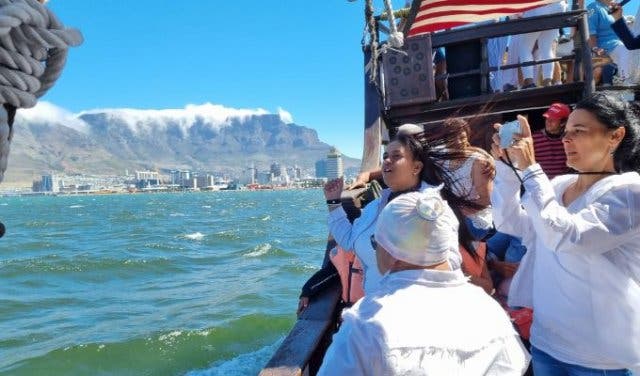 Once you head out to sea, the views are epic. Image: Yacoob Yachts

BOOK A SUNSET CRUISE WITH PIRATES

The pirate crew are part of every trip experience whether you book a children’s birthday party, an adult party, a sunset cruise or any special event, such as a surprise engagement proposal, while sipping on champagne from the onboard cash bar. Sunset cruises have DJs onboard, and if you book the whole boat, you get to choose the beats you’d like (cost starts at R380 per adult).

And did you know, these famous scallywags have been onboard the Jolly Roger: Penelope Cruz, Charlize Theron, Mila Jovovich, the cast from Mad Max and Toby Stephens, aka Captain Flint? So you’ll be sailing in fine company. 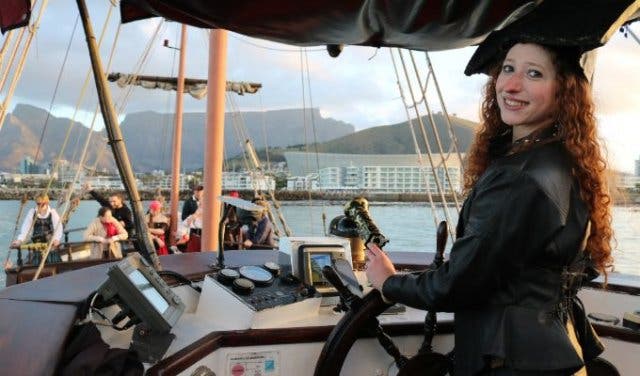 The crew are very much part of the entertainment – you won’t be bored. Image: Yacoob Yachts

OTHER EPIC PARTY IDEAS FOR YOUNG AND OLD

There are always holidays coming up. Here are some suggestions of things to do with the kids.

Keeping kids entertained can be costly. These excursions won’t break the bank.

Friends getting married? Send off former singletons with a party to remember.