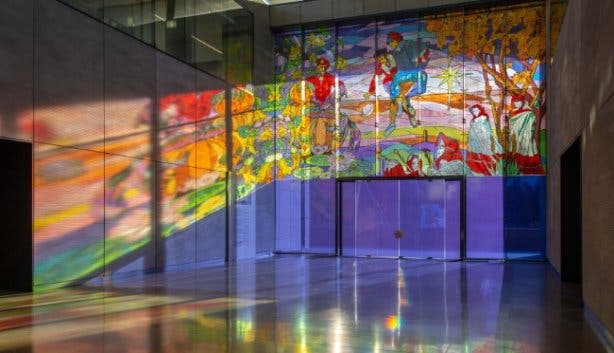 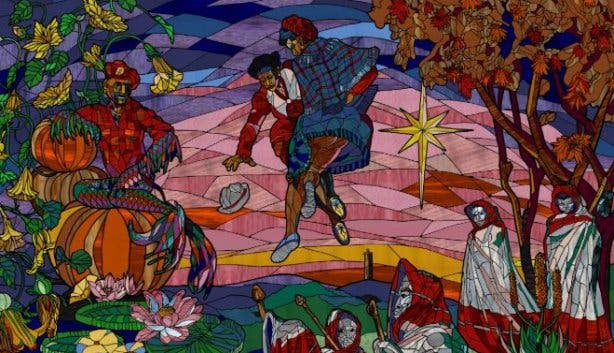 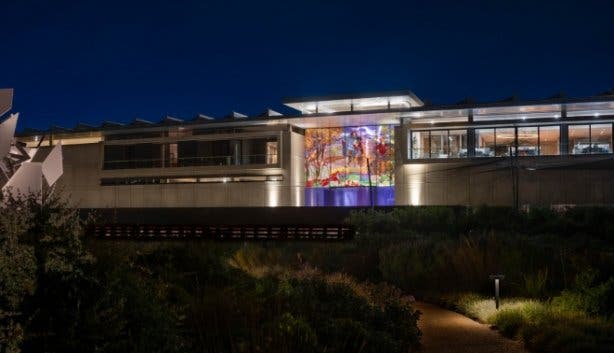 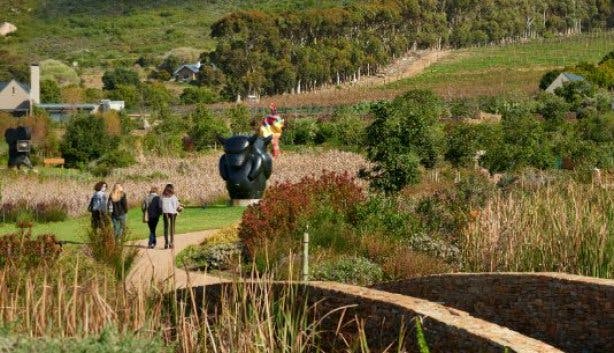 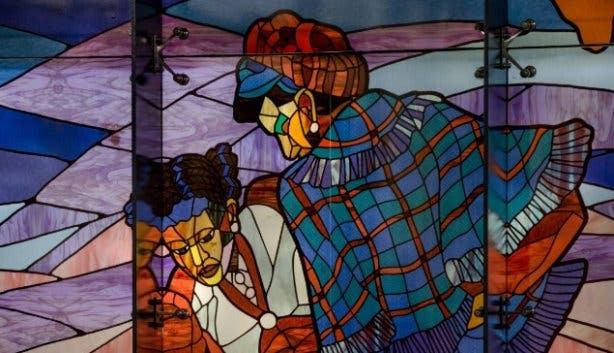 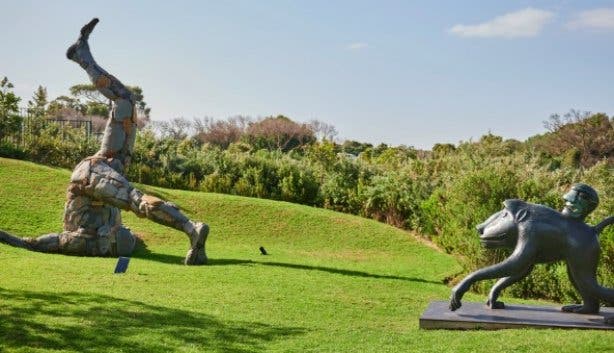 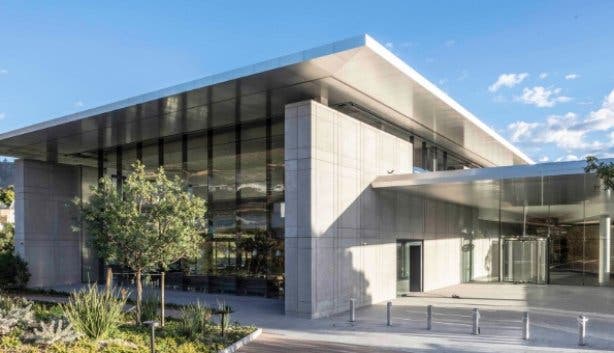 The iridescent exhibition, which is inspired by influential black female figures, colonial history as well as Athi’s personal history, is like “gazing into the South African rainbow”. See the other exhibitions, as well as the Sculpture Garden, when visiting the Norval Foundation. 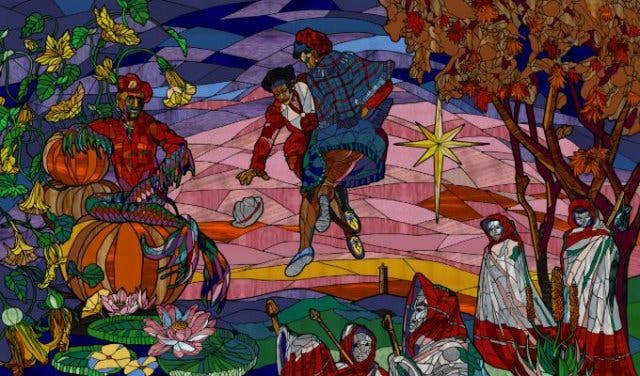 This mesmerising and moving body of work uses myths, creating an avatar of Athi-Patra Ruga’s own imagination and was partly influenced by Noni Jabavu, a black female journalist from the Eastern Cape.

BE ENCHANTED BY THIS IRIDESCENT DISPLAY

The mural, which is attached to the 3-layered glass window in the Norval Foundation’s central atrium, is made using colourful film that has been constructed to resemble the stained glass windows of a church. 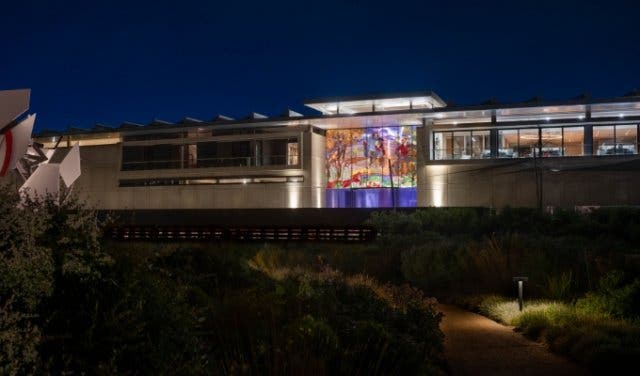 It is quite magnificent when the sunlight pours through, leaving an iridescent rainbow display on the floor and walls below. 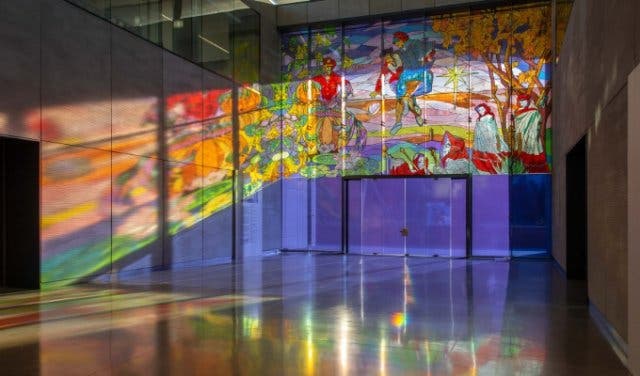 Besides Noni, Athi’s work is also inspired by Khewzi, the morning star, but also Fezekile Ntsukela Kuzwayo also known as “Khwezi”, who pursued rape charges against former president, Jacob Zuma and who was forced into exile. 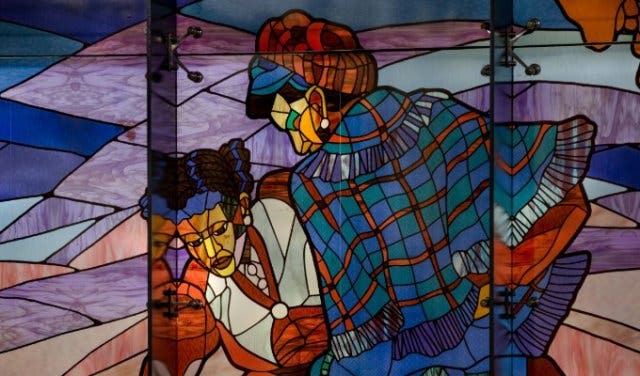 Athi has created what Norval Foundation describes as avatars, who are displayed in the artwork, across space and time, converging as one interlinked narrative. The avatars also draw on Athi’s own experiences living between the Eastern Cape and Cape Town.

SPEND TIME IN THE SCULPTURE GARDEN

Between reeds or propped up on the lawns are the magnificent 3D artworks of the Sculpture Garden, which can be viewed all year round. Featuring sculptures from artists both national and around Africa, the garden showcases the best of African artistic talent. 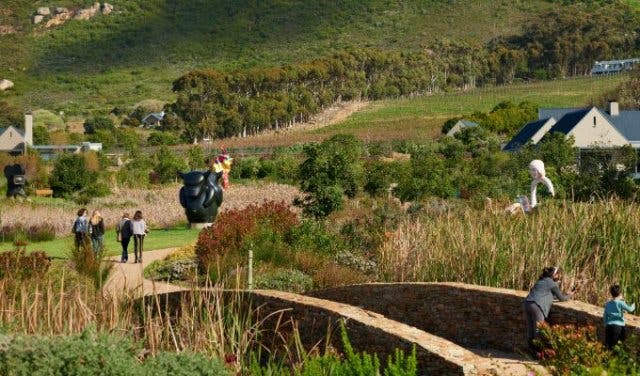 There’s a brightly striped steel and resin sculpture that looks as if it is flowing in the breeze, by Yinka Shonibare; and a rock formation of a man stretching on the lawn, a work by Angus Taylor. Don’t miss the stainless steel display that captures the reflection of the mountain backdrop, created by Mark Swart and seek out the sound installation by James Webb. 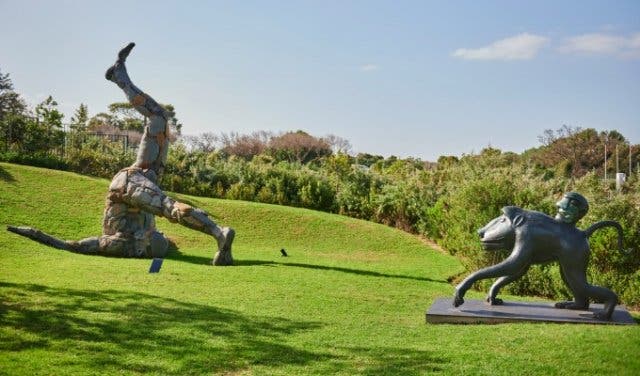 CHECK OUT THE OTHER EXHIBITS

There are some impressive exhibitions on at the same time, as one would expect at Norval Foundation. There’s Alt and Omega, by Jackson Hlungwani on until 10 January 2022, and The Reunion, artist Georgina Gratrix’s first solo exhibition on until 18 October 2021. 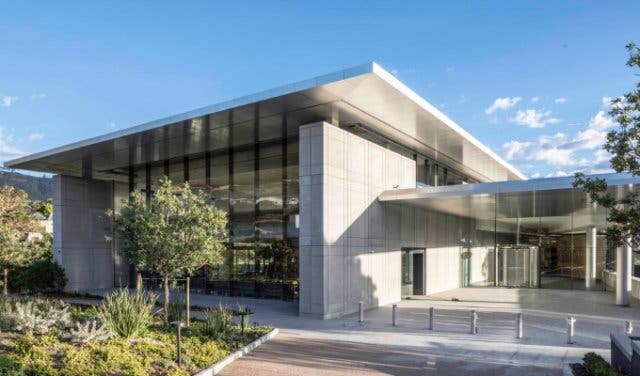 Athi-Patra Ruga's exhibition will be on at Norval Foundation until 14 March 2022. Norval Foundation is open every Monday to Sunday, you can purchase an annual pass that will give you unlimited access to the exhibitions as well as the Sculpture Garden, for R180 (no once-off tickets sold). Tickets can be purchased at the door or bought here.

DISCOVER MORE OF WHAT CAPE TOWN HAS TO OFFER

Take advantage of everything taking place this weekend in Cape Town

Check out these world famous galleries in Cape Town

From delis to spots to picnic spots, here are a few new spots to visit in Cape Town